skip to main | skip to sidebar

Sometimes the smallest thing can change the whole course of our lives. It may be the accidental meeting of someone, being in the right (or wrong) place at the right (or wrong) time, or even a job you thought you were overqualified for. In the case of Jonathan Simons, it was forgetting to put a spoon in his lunch bag when he was working as an apprentice to a furniture maker. He had to have a spoon to eat his soup, so he grabbed a piece of scrap wood and quickly shaped a spoon. That was nearly four decades ago. Today Jonathan is the best known spoon maker in, well, the whole world.

An art and design major at the University of Illinois, Jonathan knew he wanted to create something—something both beautiful and functional. So he began an apprenticeship with a furniture maker in Maine. Following that, he worked in a canoe-seat factory. But when he got laid off from that job he decided he should work for himself. A home workshop in a garage in the middle of winter when the temperatures would dip to 20 degrees below zero limited his options; it was too cold for glue to set, so he could only make single piece products Re-enter the spoon!

A move back to his home state of Pennsylvania put him in a milder climate and also provided him with a plentiful supply of native hardwood. In the following years Jonathan expanded his product line, solidified his business practices, and developed a wide market for his spoons. But he didn’t stop with spoons! After all, spoons aren’t the only utensil we use. One of the highlights of visiting the craft markets is seeing what new utensils Jonathan has developed since the last time we saw him! At our last visit I was brave enough to request Jonathan work on something I needed. He immediately started throwing out ideas of 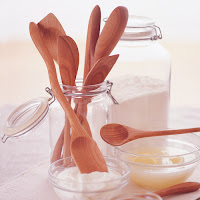 how it could be accomplished, so it wouldn’t surprise me to see something along those lines the next time we see him.

As Jonathan says, “Wooden spoons are some of the simplest tools in our homes, yet have an unlimited variety of uses and designs to explore.” He’s still just as excited exploring and creating utensils with a balance of function and quality so that they function beautifully and are beautifully made. I don’t promise that they will make you a better cook, but I do think they will make your time in the kitchen more enjoyable. 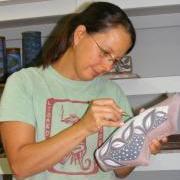 Which is the most important-form, function, or embellishment? For some the shape is their primary concern. Others focus mainly on the function while still others pay little attention to the shape and spend all their energies on embellishment. For Jennifer Stas, all three are important. She states, “The fundamental goal of my work is simple: a marriage between aesthetics and function, brought about through distinctive use of color and form. Jennifer starts with a practical form,
one that serves the function well, and then adds volume and texture until it becomes a palette for layers of colorants and carving. Each step along the way is important in creating the right balance of function, form and embellishment.

Jennifer lives in North Carolina and finds that the natural beauty and wildlife in both the mountains and on the coasts inspire her.
They are reflected in her pottery through the use of vibrant colors set against the earthy brown of the clay as well as the contrast of matte and semi-matte glazes against shiny and hard surfaces.

Whether it is a sea turtle on a vase, a heron on a mug, or butterflies frolicking on a pair of salt and pepper shakers, Jennifer combines her love of nature with a form that serves a function as
it pleases the eye. As in a good marriage, they compliment each other. See more of Jennifer's pottery.

“Mastering glass is in understanding it, not controlling it,” says Ed Branson. Over the last 30 years of being a studio artist, Ed’s understanding of glass has developed along with his skill as an artisan. Ed focuses on the creative glassblowing process at the same time stretching his knowledge and experimenting as he explores the nature of glass. His curiosity and creativity have led him to discover new techniques that he incorporates into his work.

He states, “I’m not trying to create new forms and colors as much as I’m trying to discover them.” We are the beneficiaries of his discoveries! His forms are elegant and his colors are breathtaking! The combination of form and color with the addition of light produces an exceptional visual experience.

“Glass is a beautiful, fluid material,” states Ed. “I love to search for new ways of capturing this transparent liquid in motion.” The graceful shapes of his tropical bowls, his waves, and his vases are examples of arrested movement. The color combinations in light produce magic.

Ed’s artistic approach to glassblowing he says is fairly simple: “trust the glass, have fun, accept mistakes, study nature and search for beautiful forms and colors inherent in the glass’ personality.” It may sound simple, but it has come with many years of day-to-day experience in the studio. We can trust that he offers us the best of what he has learned, experienced, and produced.

Artists are typically innovators, stretching the limits of their imagination and skill looking for interesting materials to incorporate into their chosen medium. Victoria Varga is an example of a jeweler who is constantly looking for new and innovative ways to construct her “mini sculptures” or art to wear pieces.

typically begins by cutting out her designs in silver sheet. She then fabricates a rim with silver (or sometimes stone or synthetic ivory) and builds a hollow box for the inlays. The inlays may be 23 karat gold leaf, copper or pastel pigments that are applied with resin from the back. The use of these non-traditional materials in combination with the silver results in lightweight, three-dimensional inlays. The pieces
are then finished by polishing the cured resin and silver to a high luster before they are assembled into the final piece of jewelry. Sound simple? Well, there are over thirty steps required to hand fabricate each piece!

So how does one become interested in producing such unconventional jewelry? received the BS in fine arts from . After completing her graduate studies in metals at , she and her husband, Daniel Brouder, moved to where they co-founded the studio that bears her name. Fourteen years later they moved their family and studio to the coast of where they continue to hand fabricate ’s designs. She has always been challenged to transform a static material like silver into a miniature work of art that has strikingly clean graphic design both lightweight and comfortable to wear. Her bold use of color in combination with highly polished silver makes a statement. Her signature line of jewelry has a very modern yet timeless appeal and reflects her personality.

Earth (clay) and water...two such common elements. But that’s where the potter begins, and from those two elements he creates a vessel that is so much more. He will take a simple shape, make additions, alter the shape, make embellishments; and then add the element of fire!  Of course this is a huge oversimplification of all that the potter does. It takes huge amounts of skill and artistry, years of training, and vision for the potter to take these common elements and turn them into functional items that grace our tables, contain our flowers, and please our eyes. It’s almost like magic.

Ira Burhans is one such magician. Ira received his Bachelor of Fine Arts degree from with a major in ceramic art and a minor in sculpture. During an internship in Clayworks Studio Ira studied numerous forms of ceramics, both functional and sculptural, and explored different firing processes that transform the basic raw materials into usable forms. Drawn to the classic Japanese pottery, like so many other potters, Ira finds the simple shapes and glazes appealing. “Over the course of 30 plus years I’ve found the relationship between form, texture, and glaze to be both challenging and interesting,” he says.

Although the majority of his current work is made of stoneware clay and functional by nature, it exhibits a strong sense of the sculptural. His altering of the surface, adding curled handles to the form, and then carving the surface, each create movement and seem to make the pots dance. One can sense the influence of his environment in the pieces: the sands and breezes as well as the tides and breaking waves find their way onto the pots, enhancing the surface without lessening the function. Ira’s glazes add another element of variety and reflection of his environment and vary from a soft green and tan to a strong black and tan.

Shape, color, function are all influenced by Ira’s environment and combine to create a balance, bringing us work that is sculptural yet functional, exciting yet calming, and stirring yet soothing. See more. 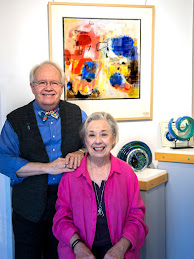 Smith Galleries is located on beautiful Hilton Head Island in the lowcountry of South Carolina. The gallery features the work of 300 American artists and craftsmen. 843.842.2280